Recently a video surfaced on the internet showing a police K9 handler using a leash to lift the dog off the ground, then striking the dog in the chest with the other end of the leash. The officer was placed on administrative leave by his department after the YouTube video surfaced of the officer choking and hitting the police dog.

The officer was clearly attempting to remove, or have the dog release, a ball or toy from his mouth.  Later in the video, you can see the object hit the ground and the handler picks it up and places it in his pants pocket.  Unfortunately, this scene plays out all too often.  Sadly, this exact same process is often seen as a “common practice”.  Police K9 handlers and trainers have even testified in court that this is a “standard method” for having a police dog release something. 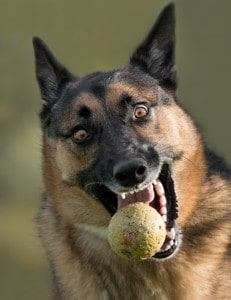 What we often see is that handlers and trainers simply never teach the dog to “out” or release an object.  In many cases, the dog is simply punished for not releasing.  Another common technique is to send the dog, that won’t release, after a decoy in a suit or sleeve to bite them. After taking the bite, the handler orders the dog to let go and then holds the continuous button on a remote training collar in hopes that the dog will release.  Rarely, have I ever seen this work.  All of these scenarios create a situation and relationship that involves a great deal of stress and conflict and is generally counterproductive. A typical response when the dog fails to release is simply that “He’s stubborn and will never understand” or “This dog is dominant or alpha” and therefore won’t release the toy.  However, the fact of the matter is that often the dog simply does not understand what is being asked of him because it has never been properly taught.

There are a variety of ways to effectively teach a dog to release toys, sleeves, and even bad guys and I’m not saying that there is a right or wrong way to do it. What I am saying is that you have to teach the dog what you want before, or instead of, simply punishing it for not responding to a command that it doesn’t fully understand.

One method of teaching the out, that we prefer to use, with police and detection dogs can be seen in the video below.  This method of training can take a bit longer and require a bit more effort that other techniques, but it consistently yields remarkable results with even the strongest dog. This method provides a clear and concise set of “instructions” for the dog and removes any conflict over the toy or reward.

We offer a variety of training programs and courses as well as police dog sales and training.  If you have questions about teaching the out or other aspects of police K9 training, feel free to call us at 866.200.2207 or email us at training@highlandcanine.com.