Watching a well-trained police K9 apprehend a suspect is truly a breathtaking experience. Seeing the intensity of a driven dog escalate as they focus on a decoy or take down a criminal never fails to amaze – the speed, power and concentration makes a police K9 truly unique. Although these qualities make a police dog unique, they can also make it incredibly difficult for a handler to call a dog back to them after they are released for a bite.

The negative consequences of bad training

Many commonly utilized methods for teaching a “call off” – which is the act of instructing a dog not to bite after they are released – can have many detrimental consequences.

For example, punishment- based training techniques which use harsh punishments to teach a call off are frequently justified because they are “the way it has always been done.” Unfortunately, this method can be extremely dangerous. Punishment based training can result in the dog returning, but then biting their handler out of sheer frustration. Some dogs may even refuse to bite after a harsh attempt at training a call off. Even worse, there have even been instances of dogs breaking their necks or damaging their trachea by using corrective collars which are fixed to a heavy object.

Another common issue that dogs can eventually become familiar with the call off, which will cause them to come back to their handler at random instead of responding to a cue. If a police K9’s call off is unreliable, is means that the dog’s reliability in bite situations cannot be trusted.

Teaching the recall command - before the call off - is essential

A dog must understand the recall command before the call off is taught. If the dog cannot come back to the handler reliably without distraction, then there is no chance it will return after being sent for a bite. When teaching a recall, using reward-based methods such as food to teach the dog to return to the handler makes it an enjoyable experience. Once the dog understands the cue, a higher value reward such as a tug can be offered.

To increase the dog’s proficiency with the command, add in distractions. Practice the recall in different locations and distracting environments, ensuring that its sole focus remains on the handler, and add in other elements such as distance by moving further away. The dog should always be rewarded upon returning to the handler with a game of tug. This method sets the dog up for success before a decoy is ever in front of them.

Teaching the call off

When the dog’s recall command is reliable, it is time to start working on the call off. The process for teaching the call off is as follows:

With time, consistency and practice, a trainer can teach a dog that returning when they hear the recall command is the most exciting option. Through the use of positive reinforcement, a dog will want to return to its handler, resulting in a call off that is reliable and effective. 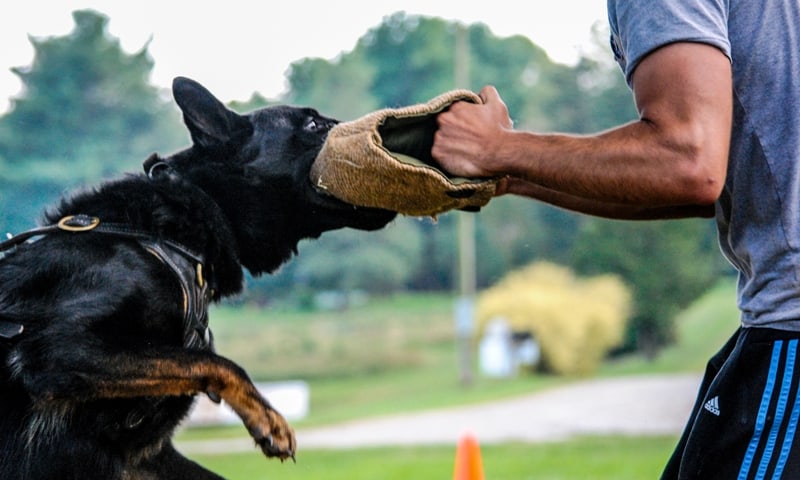 When practicing your call off, always ensure your dog is sent more than they are called off so they do not begin preemptively returning to you. Doing this will help keep their send-off reliable and will maintain their enthusiasm during bite work. Always be certain to practice call-offs randomly throughout your sessions with a dog to prevent predictions in patterns.

Corrective collars can help to make a dog more reliable; however, remote training collars and other tools should be introduced to the dog outside of a bite work environment. This ensures that the dog fully understands the meaning of each training tool. If a dog has not been correctly introduced to a training collar in other environments, it should not be utilized during a call off.

Training a reliable recall is possible when the process and structure is properly devised and implemented. Teaching a dog one step at a time may be time consuming but ultimately will produce consistent, reliable and safe results.

How Can Online Training Help A Time-Pressed K9 Unit?