As “dog people”, it is not uncommon to find ourselves in a light-hearted verbal sparring match with one of our fellow “people”. The topics change day to day depending on current events and articles we have read. However, one subject that will never be allowed to fade away is what breed is best and why. A person’s favorite breed is always as unique as the individuals themselves and I often find myself opening my canine encyclopaedia after a light-hearted debate to reference a particular breed I had only just learned about. You see, there are so many weird and wonderful breeds in this world of ours that it is almost impossible to have even a basic knowledge of them all. No matter the direction the conversation steers, it will always find its true north and you will eventually discover yourself talking about the one breed everyone knows. I am talking, of course, about the German Shepherd.

They come in all shapes and sizes, some heavily muscled, others wiry and athletic. Their coloring is as versatile as their build, with the American Kennel club listing eight official colors ranging from solid white to solid black. Some have thicker coats than others and their posture can be different depending on the dog. However, no matter how versatile in appearance this breed will be, a decoy, a suspect and even cat people know when they are dealing with a German Shepherd.

About the German Shepherd 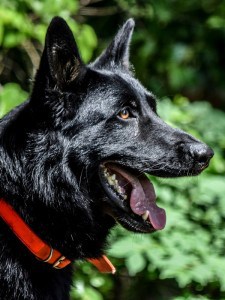 German Shepherds possess many fine attributes that make them ideal working dogs. It is estimated that ranks of German Shepherds serving in United States Law Enforcement tally over 8,000. Armed with intelligence, loyalty, trainability and endurance, it is no wonder that police and military canine handlers all around the world consider their German Shepherds more than just a dog. The breed has been known for their work with law enforcement for so many years that many people automatically refer to them as “police dogs”.

German Shepherds utilized as working dogs is nothing new. They were purposely bred from the beginning of their origin to assist man. In the late 1800s, An ex-cavalry captain and former student of the Berlin Veterinary College, Max Von Stephanitz had a strong belief that dogs should be bred specifically for working. While attending a dog show in 1899, he witnessed a dog named Hektor Linksrhein perform. Hektor was a product of selective breeding and fulfilled the requirements of what Von Stephanitz was looking for. Impressed by the animal’s strength, intelligence, loyalty and beauty, he purchased Hektor immediately. After purchasing the dog, he changed his name to Horand von Grafrath and eventually Von Stephanitz founded the Verein für Deutsche Schäferhunde (Society for the German Shepherd Dog). Horand became the first registered German Shepherd and became the standard of future breeding programs with other registered dogs with the same desirable traits.

The breed grew slowly in popularity and clubs for the development of the breed began to form. Eventually the breed would be exported all around the world. During the World War I, both the French and German military used German Shepherds for a number of roles, including search and rescue of casualties in “no man’s land”. They were also used to carry supplies, ammunition, messages, cables and first aid between trenches. Many of the allied forces were so impressed with the dogs that they captured Shepherds to take home with them after the war had ended.

After much success in the First World War, the German Shepherd was once again put to the test for the Second and was pressed into military service in large numbers. This time, a large number of these dogs were being trained to also detect various types of unexploded devices. Since its first performance in the First World War with an impressive repeat performance for the World War II, the German Shepherd has been used in many major conflicts and has been recruited into law enforcement agencies all around the world. 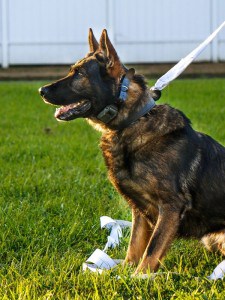 Here at Highland Canine training, LLC, training German Shepherds is a daily occurrence. It comes as no surprise that there is always somebody in need of a reliable working German Shepherd. Training these dogs is no daunting task; it is in fact a pleasure and enjoyable experience. It is so rewarding to experience working with a dog breed that so consistently packs those desirable features as highlighted before. Intelligence, loyalty, endurance, trainability, the German Shepherd indeed has it all! Using these genetic traits we regularly train German Shepherds for a wide variety of scent tasks such as cadaver detection on land and water, human search and rescue on variable terrains, and explosives and narcotics detection just to name a few. We also work daily with our Shepherds to supply the constant need of reliable patrol dogs. If you have a desire to put a dog to work, chances are we have a German Shepherd that will fulfill your desires. We don’t only just recommend German Shepherds as working dogs, we have trained countless German Shepherds in our pet dog training programs and we know they can make excellent pets when placed with a compatible owner.