Coke versus Pepsi. Chevy versus Ford. Android versus Apple. These are some common debates among the population worldwide that can at times fuel tension and ignite controversy. If, however, you are a dog person, it’s more than likely you don’t have time for such comical debates. We all know the only topic on your mind worthy of a dispute is of a much more important matter. It’s more interesting, more exciting and there’s more pride at stake when you contest on such a subject. I am talking, of course, about the infamous Belgian Malinois versus German Shepherd argument.

Two universally popular breeds with endless amounts of potential, both dogs possess very specific traits and drives that we look for in the perfect police or military working dog candidates and it’s no surprise that a large percentage of handlers desire either a Shepherd or a Malinois. This is perhaps why our favorite debate is in continuous circulation, settled and laid to rest one day only to be given new life the next day. Handlers are of course very proud of their canine companions and very competitive; that’s how they became handlers in the first place, always desiring to learn more to improve their canine’s working capabilities and to impress the competition. So, if you are a proud Malinois fan, you are in luck, because this article will discuss everything Malinois.

About the Belgian Malinois 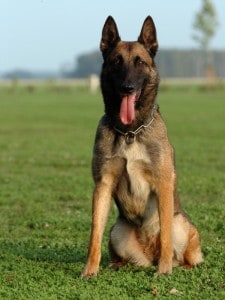 Loyal, intelligent, protective and alert, the Belgian Malinois is a proud member of the Herding Group of dog breeds. They have extreme amounts of energy and arguably possess the highest energy levels of all dog breeds. They are loyal, alert and watchful. A Belgian Malinois does well around children, strangers and new environments if they are socialized from an early age. They display an instinctive herding behavior and many have an excessively high prey drive. Because of this, they can become destructive or develop neurotic behaviors if not given adequate amounts of exercise and mental stimulation every day. They are medium sized, strong dogs that require consistent obedience training and stern leadership. This can often cause problems with handlers or pet owners who underestimate the commitment it takes to own and maintain a Belgian Malinois. Their high energy output and intense drives can be too much for somebody wanting a pet dog, however, as dog trainers and handlers the Malinois packs all the tools we need to create the ideal working dog.

The Belgian Malinois dates back to the 1800s, originating in and around the city of Malines in Belgium from where it received its name. In 1891, the very first Belgian Shepherd club was created in Belgium by a man named Adolphe Reul. He decided he wanted to create a breed standard among all the Belgian Shepherds and advised owners to breed their dogs to others with the same coat type, regardless of color. Most of the breeders agreed and a standard was set. As a result, they produced four different types of Belgian Shepherds. These include the Groenendael (longhaired black coat), Tervuren (long haired color coat with black overlay), Laekenois (woolly brown and white coat) and finally the Malinois (short haired fawn coat). At the outbreak of the World War I in 1914, the number of breeders and breeding stock for these new breeds diminished. In an effort to save the breed from complete extinction, regulations became lenient and all dogs were allowed to breed regardless of their coat and color type. A different variety of puppies with a greater range of coats and colors started to be bred in each new litter as a result. The puppies were then registered as the variety they were born and not as the variety of their parents, which is still the method of registration used to this day. These efforts designed to halt the extinction of the Belgian Shepherd varieties were successful and, after the war, the breed began to thrive once more.

The breed was not utilized in a working capability in the First World War, however they later became very popular. European countries such as Belgium, Germany and The Netherlands realized its potential and recruited Malinois for their armies in World War II. To date, armies and Law Enforcement Agencies of all varieties the world over also have an appreciation for the capabilities of Belgian Malinois and their potential as working dogs. If there is work to be done, the Malinois will never disappoint. From local law enforcement to special forces units, the Malinois is there, enthusiastically completing the tasks they are trained to do. Malinois patrol the White House for the Secret Service and the US Navy Seals used a Belgian Malinois named Cairo in Operation Neptune Spear to help secure the perimeter of Bin Laden’s compound. 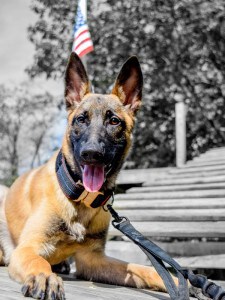 Here at Highland Canine Training, LLC, we have a constant rotation of Malinois in training to satisfy the perpetual need for strong, driven working dogs. We have trained Malinois in a wide variety of training methods for an even wider variety of tasks. We do not just provide strong working Malinois for Law Enforcement agencies in the United States; we also provide strong working Malinois for law enforcement, military, private security and personal protection tasks worldwide. We have never been breed specific here at Highland Canine Training. If a canine has the drives for a specific task, we have a desire to train it. With that being said, it is always a privilege and an exciting experience to work with a Belgian Malinois. A Belgian Malinois is not just a dog waiting to be trained. It is a precision instrument you utilize when lives are at stake and you cannot afford anything but the best. The temperament and drive of the Malinois from years of selective breeding make them the perfect canine partner in any dangerous situation. They can easily be trained to perform any type of odor detection in stressful environments without hesitation. Their genetic courage and muscular, agile frame result in a genetic gift that will make any decoy or criminal suspect remember the Malinois that bit them. If you are after a courageous, loyal and strong working dog, the Malinois should never be overlooked.